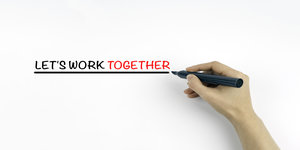 After a brief phone conversation about the possibility of serving as local counsel in a defamation matter, a would-be client sent a lawyer an email with the names of the relevant players “[f]or conflict purposes,” and requested a fee agreement “[i]f there is no conflict.” The lawyer “responded on that same day with applicable hourly rates and stated, ‘I hope we get the opportunity to work together.'” Id. The next day, the lawyer declined via email: “I’m afraid we have a conflict and will not be able to assist you with this matter.” See Valizadeh v. Doe, Civ. Action No. 3:16-03098-MGL (D.S.C. Jan. 10, 2017).

Apart from conclusory statements, the only evidence Plaintiff provides in support of the position he is a prospective client . . . is the statement in [an email that], “I hope we get the opportunity to work together.” Given the Court’s own experience as a long-time member of the bar, it is of the opinion [the] statement was merely a polite curtesy. Customary niceties such as “I hope we get the opportunity to work together” are not binding and are not, absent unusual circumstances, reasonably interpreted to indicate a commitment is likely. Moreover, the would-be client “clearly understood [that the lawyer] had to check for conflicts prior to any engagement.”

The court’s analysis—although not the result—would have differed had this motion been considered in Louisiana. Under Louisiana Rule of Professional Conduct 1.18(a), “[a] person who consults with a lawyer about the possibility of forming a client-lawyer relationship with respect to a matter is a prospective client.” See La. Rules of Prof’l Conduct R. 1.18(a). A comment to the similar ABA rule defines “consults” as follows:

Whether communications, including written, oral, or electronic communications, constitute a consultation depends on the circumstances. For example, a consultation is likely to have occurred if a lawyer, either in person or through the lawyer’s advertising in any medium, specifically requests or invites the submission of information about a potential representation without clear and reasonably understandable warnings and cautionary statements that limit the lawyer’s obligations, and a person provides information in response.

See ABA Model Rule 1.18, cmt. 2. The comparable Louisiana and ABA standards differ from the South Carolina version of Rule 1.18 considered by the Valizadeh court. In contrast to the Louisiana and ABA rules, the South Carolina rule provides that a person becomes a “prospective client” only when there exists “a reasonable expectation that the lawyer is likely to form the relationship.” See S.C. Rules of Prof’l Conduct R. 1.18(a) (emphasis added).