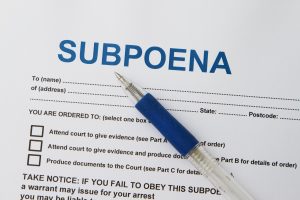 No, according to a recent 2-1 decision by the United States Tenth Circuit Court of Appeals.

Rule 3.8(e) prohibits a prosecutor from issuing a subpoena to a lawyer “in a grand jury or other criminal proceeding to present evidence about a past or present client unless the prosecutor reasonably believes: (1) the information sought is not protected from disclosure by any applicable privilege; (2) the evidence sought is essential to the successful completion of an ongoing investigation or prosecution; and (3) there is no other feasible alternative to obtain the information.” See Louisiana Rules of Prof’l Cond. R. 3.8(e); see also ABA Model Rule of Prof’l Cond. R. 3.8(e).

On June 7, 2016, a divided panel of the Tenth Circuit held that the Grand Jury Clause of the Constitution preempts the application of this rule to a federal prosecutor who seeks to subpoena a lawyer to testify before a grand jury:

[W]e conclude that [applying Rule 3.8(e)] in the grand-jury context [imposes] far more onerous conditions than those required by federal law. More specifically, because such heightened requirements for attorney subpoenas would impede the grand jury’s broad investigative mandate—which the Framers specifically envisioned in enacting the Grand Jury Clause of the Fifth Amendment—the challenged provisions . . . conflict with federal law and are preempted.

One judge dissented, opining that Congress authorized the application Rule 3.8(e) against federal prosecutors through the 1998 McDade Amendment, 28 U.S.C. § 530B, which provides that federal prosecutors “shall be subject” to state rules of ethics “governing attorneys in each State where [they] engage in [their] duties, to the same extent and in the same manner as other attorneys in that State.” Id.