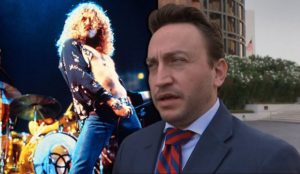 The lawyer who recently sued Led Zeppelin for copyright infringement and lost has lost again. On June 30, 2016, the United States Court of Appeals for the Third Circuit affirmed a district court order suspending Pennsylvania lawyer Francis Malofiy from the practice of law in federal court for three-months. See In re Malofiy, No. 15-2472, 2016 BL 210584 (3d Cir. June 30, 2016).

Malofiy called an unrepresented defendant in another copyright case,1 William Guice, and “foster[ed] the impression that Guice was a witness rather than a person who stood personally to lose money.” The court found that Malofiy “should have remedied the confusion by explaining that Guice’s interests were adverse” to his clients. Instead of doing so, Malofiy “consistently suggested that the opposite was true.” Malofiy’s conduct, found the court, violated Rule 4.3(c), which provides that “when the lawyer knows or reasonably should know that [an] unrepresented person misunderstands the lawyer’s role in a matter, the lawyer shall make reasonable efforts to correct the misunderstanding.”

Worse still, Malofiy told Guice “several times that he was . . . ‘not going to do anything’ with the claims against Guice,” but instead he filed a motion for default judgment against him.  Such statements violated Rule 4.1(a), which prohibits a lawyer from knowingly making “a false statement of material fact or law to a third person.”

Finally, the court noted that Malofiy also engaged in conduct that raised concerns about his professionalism:

For instance, the following are examples of comments Malofiy made during depositions: “I’m tired of your clap trap and hogwash”; “You’re like a little kid with your little mouth”; “This is bullshit”; “This is nauseating—wait. This is nauseating”; and “I never seen [sic] any lawyer do this so bad ever.” . . . Additionally, Judge Diamond found that Malofiy made 65 “speaking” objections (whereby counsel improperly testifies rather than merely stating the reason for the objection) during a single deposition. Malofiy has since conceded that his behavior during discovery was unprofessional and uncivil.