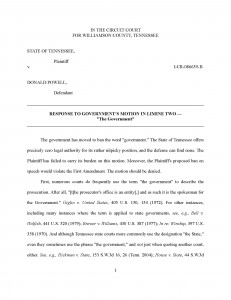 In response to a state motion to ban the use of the word “government” during a criminal trial, Tennessee criminal defense lawyer Drew Justice filed a response in which he requested that he be referred to as “Defender of the Innocent,” and that his client be called “the Citizen Accused.” See Tennessee v. Powell, No. I-CR-086639-B, Circuit Court for Williamson County, State of Tennessee. Arguing that the state offered “precisely zero legal authority for its rather nitpicky position,” the filing contends that the First Amendment permits the reference. In the alternative, it argues that if the parties are permitted to “pick their own designations and ban words, then the defense has a few additional suggestions for amending the speech code”:

It concludes: “WHEREFORE, Captain Justice, Guardian of the Realm and Leader of the Resistance, primarily asks that the Court deny the State’s motion, as lacking legal basis. Alternatively, the Citizen Accused moves for an order in limine modifying the speech code as aforementioned, and requiring any other euphemisms and feel-good terms as the Court finds appropriate.”