As of 2014, 1.1 million lawyers were in the labor force. See Bureau of Labor Statistics, Labor Force Statistics from the Current Population Survey.  On December 8, 2015, the United States Bureau of Labor Statistics released its estimate on the total number of lawyer jobs that will be created in the United States over the next 9 years. Its projection for the future: only 43,800 new lawyer jobs by 2024. According to ever-thoughtful blogger Matt Leichter, the outlook is not good for law schools and those thinking about attending one:

The number of law school graduates and new bar admits far exceed the projected lawyer job growth rate. Consequently, it appears that although interest in law school has waned, far more people are attending law school than the profession can employ.

See BLS Projects Only 43,800 New Lawyer Jobs by 2024 (posted Dec. 9, 2015). Sadly, this is a dog-bites-man story. But a story that most American law schools (and the universities that profit from them) still refuse to accept. 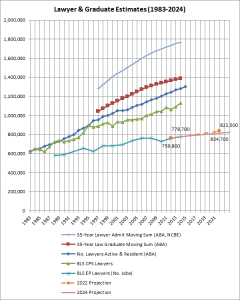