On November 12, 2019, the Texas State Commission on Judicial Conduct “publicly warned” a judge who performed opposite-sex marriages, but who “declined to perform same-sex weddings.” More particularly, the judge directed her staff to give same-sex couples a document that stated the following: “I’m sorry, but Judge Hensley has a sincerely held religious belief as a Christian, and will not be able to perform any same sex weddings.” In “warning” the judge, the Commission cited Texas Code of Judicial Conduct Canon 4A(1), which requires a judge to handle extra-judicial activities in a manner so as to “not cast reasonable doubt on the judge’s capacity to act impartially as a judge.” See In re Hensley, Tx. CJC No. 17-1572 (Nov. 12, 2019).

Despite this judge’s conduct, this issue should be well settled. For example, ABA Standing Committee on Ethics and Professional Responsibility has issued a formal opinion stating that a judge “may not decline to perform marriages of same-sex couples if the judge agrees to perform opposite-sex marriages.” See ABA Formal Op. 485 (Feb 14, 2019). This opinion is based on provisions of the ABA Model Code of Judicial Conduct, which provide that a “judge shall comply with the law, including the Code of Judicial Conduct.” See ABA Model Code of Judicial Conduct Canon I. Further, a judge must “act at all times in a manner that promotes public confidence in the . . . impartiality of the judiciary.” Id. r. 1.2 “Impartiality” includes acting with the “absence of bias” against particular “classes of parties.” Id. at Terminology. Finally, a judge must not manifest bias based on “people’s sex, gender, sexual orientation, or marital status.” Id. r. 2.3(B).

So, what’s a judge who disapproves of same-sex unions to do? This, said the committee:

This ABA advisory opinion is consistent with several judicial decisions and advisory opinions that predated it. For example, the Supreme Court of Oregon in 2018 sanctioned a judge who “inappropriately screened . . . wedding applicants to ensure that they were not same-sex applicants, because [respondent] refused to marry same-sex partners even though they could lawfully marry under Oregon law.” Said the court:

Once a judge chooses to make himself or herself available to the public to perform marriages as part of his or her judicial duties, Rule 3.3(B) prohibits the judge from “manifest[ing] ** * prejudice * ** against *** others,” based on attributes including sexual orientation, or permitting staff to do so. 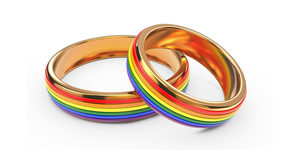 Likewise, the Ohio Board of Professional Conduct noted in 2015 that “a judge who exercises the authority to perform civil marriages may not refuse to perform same-sex marriages while continuing to perform opposite-sex marriages.” Further, “a judge may not decline to perform all marriages in order to avoid marrying same-sex couples based on his or her personal, moral, or religious beliefs.” See Oh. Sup. Ct. Bd. of Prof. Cond. Op. 2015-1 (Aug. 7, 2015). To do otherwise in the wake of  Obergefell v. Hodges, 35 S. Ct. 2584 (2015), opined the committee, would violate the judicial oath of office and standards of conduct that require a judge, among other things, to comply with the law, and to “apply the law without regard to whether the judge approves or disapproves of the law in question.” Id.

This ABA formal opinion provides the obvious and correct advice to judges. The supreme law of the land as interpreted by the nation’s highest court in Obergefell requires states to recgonize same-sex marriages. A judge must support and defend the Constitution and faithfully apply the law—irrespective of the judge’s view of the law’s wisdom or morality. Pretty simple.