Rule 5.2. Responsibilities of a Subordinate Lawyer

(a) A lawyer is bound by the Rules of Professional Conduct notwithstanding that the lawyer acted at the direction of another person.

(b) A subordinate lawyer does not violate the Rules of Professional Conduct if that lawyer acts in accordance with a supervisory lawyer’s reasonable resolution of an arguable question of professional duty.

The Louisiana Supreme Court adopted this rule on January 20, 2004. It became effective on March 1, 2004, and has not been amended since. This rule is identical to ABA Model Rule of Professional Conduct 5.2 (2002).

[1] Although a lawyer is not relieved of responsibility for a violation by the fact that the lawyer acted at the direction of a supervisor, that fact may be relevant in determining whether a lawyer had the knowledge required to render conduct a violation of the Rules. For example, if a subordinate filed a frivolous pleading at the direction of a supervisor, the subordinate would not be guilty of a professional violation unless the subordinate knew of the document’s frivolous character.

[2] When lawyers in a supervisor-subordinate relationship encounter a matter involving professional judgment as to ethical duty, the supervisor may assume responsibility for making the judgment. Otherwise a consistent course of action or position could not be taken. If the question can reasonably be answered only one way, the duty of both lawyers is clear and they are equally responsible for fulfilling it. However, if the question is reasonably arguable, someone has to decide upon the course of action. That authority ordinarily reposes in the supervisor, and a subordinate may be guided accordingly. For example, if a question arises whether the interests of two clients conflict under Rule 1.7, the supervisor’s reasonable resolution of the question should protect the subordinate professionally if the resolution is subsequently challenged. 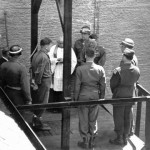 A lawyer working at the direction of another lawyer or nonlawyer is not excused from responsibility for violating these rules merely because the subordinate lawyer dutifully followed instructions. Thus, there is generally no “Nuremberg Defense” for junior lawyers who are merely carrying out the orders of a superior. See La. Rules of Prof’l Conduct r. 5.2(a) (2004); see also Restatement (Third) of the Law Governing Lawyers § 12(1) (2000). Moreover, as to the appropriate sanction for a disciplinary violation, it is not a “mitigating factor” that the client “made the lawyer do it.” See ABA Stds. for Imposing Lawyer Sanctions std. 9.4(b) (1986). Note, however, that a young lawyer’s “inexperience in the practice of law” may be a factor mitigating the sanction imposed under certain circumstances. See id. std. 9.32(f).

Paragraph (b) provides a safe harbor for a subordinate lawyer who follows the directives of a supervisory lawyer. The channel to this safe harbor, however, is narrow and shallow. Only when a subordinate lawyer follows the “reasonable” advice of a supervisor on an “arguable question of professional duty,” is the lawyer’s conduct excused. La. Rules of Prof’l Conduct r. 5.2(b) (2004); see also Restatement (Third) of the Law Governing Lawyers § 12(2) (2000); ABA Comm. on Ethics and Prof’l Responsibility, Formal Op. 347 (1981). In practice, this safe harbor is rarely used because “reasonable” resolutions of “arguable questions” are rarely prosecuted by The Office of Disciplinary Counsel.

1 thought on “Rule 5.2. Responsibilities of a Subordinate Lawyer”